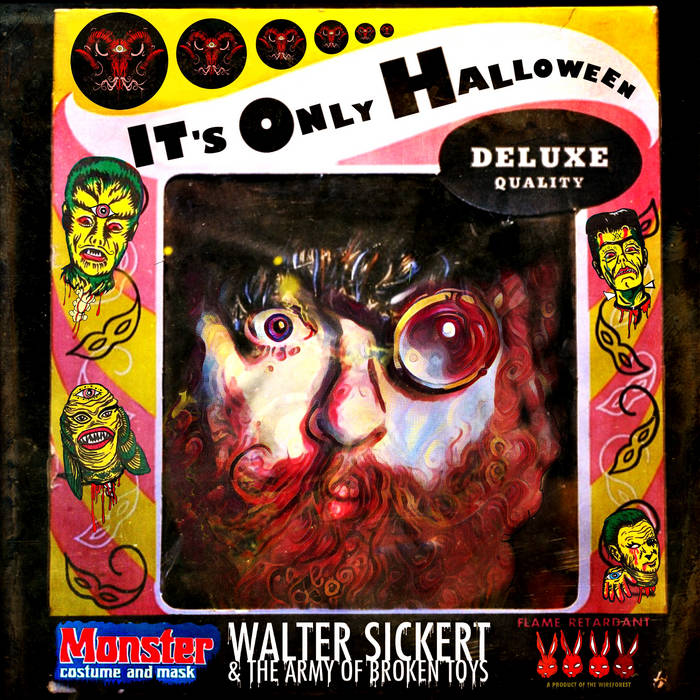 Gearald Becker Walt reminds us that Halloween is about scaring the SCARY things...

Walter Sickert & the Army of Broken Toys "It's Only Halloween"


All music by WALTER SICKERT & the ARMY of BROKEN TOYS

Dracula's been sucked dry
it seems his brides ran out of Rye.
Wolfman's dead too under the full moon
when he ran into the street and a car went boom.

A strange double feature I saw from my bed
the Black Lagoon Creature eating Pumpkin Head.
Frankenstein's monster ran out of juice,
the cursed Mummy died in a bandage noose.

Freddy and Jason, the Headless Horseman,
Medusa, The Blob, and the Leather Face clan.
IT, The Thing, the Babadook too,
then Jaws came and ate them up yum.

Alien, the Predator, and The Crypt Keeper,
The Loch Ness monster, Michael Myers and the Creeper;
they all passed away in a tenement fire,
the cost of living can cause the dead to expire.

When I was six, I had this recurring nightmare where I'd hear scratching at the front door like giant crab legs on a wooden floor, which got louder and louder until the door burst open and all of the Universal Monsters would run into the room and charge towards me causing me to wake up screaming. My grandmother asked me what was wrong and after I explained the dream to her she walked over to her old cabinet record player and dug through a small stack of dusty records. She pulled one out and placed it on the turntable and then The Monster Mash filled the room. She said, “Every time you have that dream imagine they are just coming to dance!”

Two days later I had the dream again but this time when the monsters charged me I just staring singing and dancing in my dream. "They did the mash!" I yelled at them my hands in the air dancing with non-corporal liquid fluidity and then I was in the middle of a monster dance party. It wasn't the last time I had monsters in my dreams, but it was the first time I learned I could control them and from that point on, nightmares became adventures and I watched every horror film I could sneakily get my eyes on. As I grew up and taught myself how to play music and express myself through art I noticed parts of all of these creatures dripping out of my head.

Years later at Spooky World, after meeting my hero, the glorious Elvira (who signed a skull I brought), I was waiting in line to meet Bobby Boris Pickett the co-writer and performer of The Monster Mash (born right in Somerville MA). I was nervous waiting in line. I didn't know what to say, but then it hit me as I approached him the words came out of my mouth “Thank You Mr. Pickett. Your music taught me that monsters can be fun!”

This is my homage to The Monster Mash, a present for the little kid I was at six who embraced the scary and danced.