Wake Up Your Head 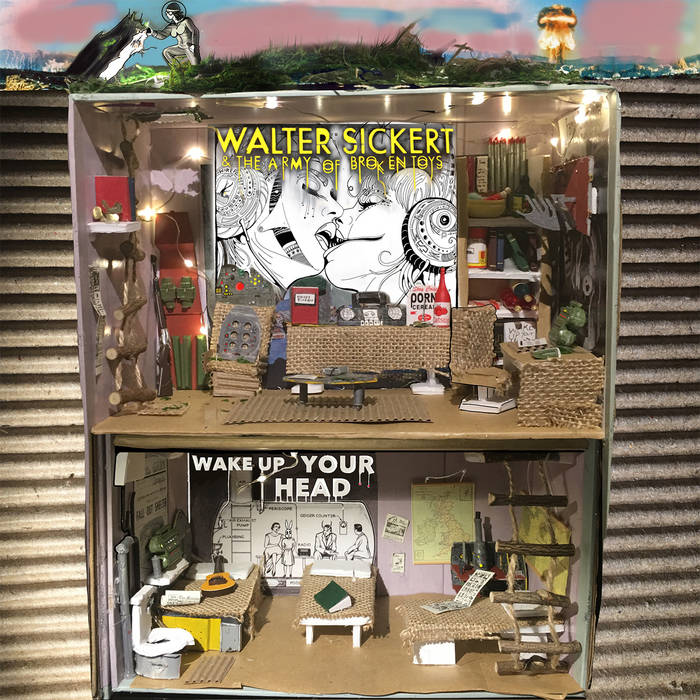 toddwaddington it's unexpected. I like reversals. Favorite track: FLOATING DOOMSDAY.

Gearald Becker Yet another 'Best' album by Walt & the Toys. Hell with adults, let the kids rule the world. Favorite track: This Is a HIDDEN TRACK.

Walter Sickert & the Army of Broken Toys - Wake Up Your Head

Submitted for the RPM Challenge 2017

All music by WALTER SICKERT & the ARMY of BROKEN TOYS


Walter & Co. take all you Broken Toys on a dystopian holiday excursion; this time exploring the possibilities of life underground after the nuclear obliteration of the surface.

Wake Up Your Head - was recorded in the 28 days of February for the RPM Challenge.

The songs were created with stream-of-consciousness and improvisational one-take recordings then mutated in the WIREFOREST mind of composer/band leader Walter Sickert.

"For this album it was important to me to do something musically that we've never really done before which is to create the first Broken Toys chaos choir, Inspired by the scores to AKIRA, 2001 a Space Odyssey, and Bjork's "Vespertine".

This experiment was one of my favorite new Ingredients and as such we wove it throughout the landscape of the entire album." – Walter Sickert

This album speaks to the past, the now and the future.

"I worry about the future a lot, not for me as much as for my two year old. I think of the horrific way in which our planet is treated, how humans are seen as dollar signs and votes to those in power. Those who would rather guarantee the prosperity of their companies and bloated egos over the health and safety of the people they were elected to serve.

When the most powerful people in our government believe in a mandated Armageddon, when they believe human rights, the environment, climate change and education take a backseat to profit; it becomes easy to imagine a future where our children are forced to deal with a cataclysmic existence brought on by greed and a disregard (or even hostility) towards education.

That's where this album begins, vignettes of a world at war, scratching at the stars for natural resources long since exploited on our own planet. The album continues to life and love in a fallout shelter, to adventures in memory erasure, and the questionable malleability of reality. It highlights the time after the reemergence of humanity where roving gangs of scavenger children cannibalize adults in retaliation for generations of suffering and where new religions are born amalgams of the little surviving pop culture and mysticism of the days before the final war.

It’s not a record about the end of the world I swear!

No seriously... It's about the start of our world right now. It's about all of us standing up for what's right and fighting for the future we believe in, the future we want for our loved ones. It's about never letting fear stop us, but instead, using it to fuel our resolve to organize, to build community, and elect officials that fight for the people not for gold and castles.

The words in the final song on the album "RESIST" implore you Broken Toys that it's time to make a stand and stomp out oppression!

WAKE UP YOUR HEAD"

Walter and I met during the time of the first RPM Challenge.

We've also put on one original musical 28 Seeds partnering with Liars & Believers at the Boston Center for the Arts - which started out as an RPM Challenge entry and our second musical, SHOCKHEADED PETER, which was originally by our hero band the Tiger Lillies.

And it hasn't been all music!

Walter has done countless fine art commissions, released pop art prints, created several comics and a children's book, created all of the art for SHOCKHEADED PETER, is currently working with the Wayne Foundation on a fundraiser based on his art, and his new projects are even more ambitious!

Two years ago at this time Walter and I welcomed Wednesday Alice Edrie - who was born on 2/23/2015 (a month early) to parents not quite done with their RPM entry, who were in the middle of tech for their theatre show and who were grateful she didn't come during one of the epic 2015 Boston snow storms!

Wednesday Alice is featured on a few tracks of this album - including a hidden bonus track!

WAKE UP YOUR HEAD is our 12th RPM offering. The band recorded, and Walter mixed and mastered everything by himself in our tiny home studio.

WAKE UP YOUR HEAD is dedicated to the last 12 years of RPMs and to the people, places, and things that have made us who we are today.

Thank you RPM! May the next 12 be as eventful and successful!