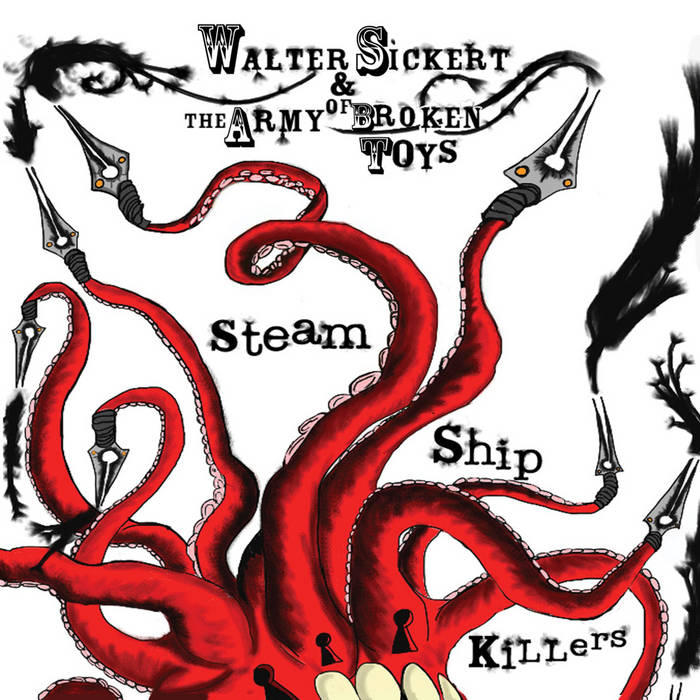 "It’s this combination of wit and strength, aided by an imposing physical presence, adoption of eccentric and appealing steampunkery and fearlessly booming voice, that makes Sickert so seductive. He’s a shaman whose cult embraces dancing into the abyss, or at least strutting around the edge for a while.

All art produced by and songs written by Walter Sickert* 2010

"SteamShipKillers" portrait inspired by a photo by Justin Moore

ALL art by Walter Sickert

Oh our
Cataclysm
Track Name: No Room
No Room:

and spiders live inside of my throat oh well...
from time to time I drink your ghost oh well I guess...
you’re my heroin pig

NO MOONLIGHT
NO SERENADE
NO REASON TOO
WE’RE ALL DUST

WE CAME FROM THE STARS THEMSELVES
IT’S TIME TO RETURN
HISTORY, HUMANITY NO ONE WILL EVER KNOW...

IT SEEMS LIKE WERE WASTING TIME
NO REASON JUST BECAUSE
YOU KNOW THIS PALE HORSE
YOU KNOW BECAUSE YOU'VE COME
Track Name: Revenge of the Rats
REVENGE OF THE RATS

THE LAB DOGS
THE LAB CATS
THE LAB MICE
THE LAB RATS
THE CHIMPS
THE SNAKES THE RABBITS TO ARE JOINING UP AND MARCHING AGAINST YOU!!!!!

Oscar Wilde funeral styled
now he can never go home
Dr. Thompson I think we lost him
now I can never gonzo

There's a whole in the boat &
now we are never coming home
Track Name: Off With Her Head!!!
Off With Her HEAD!!!

Think of, the carpenter
the little kids, that pulled you in
Think of, the door mouse
The shrinking house, that held you in

Think of, the March Hare
the smoke filled air, that pulled you there
Think of, the slithy toves
the ones that know you’re all alone

Featuring Oakland sounds from the Smart Bomb collective and Samplelov.