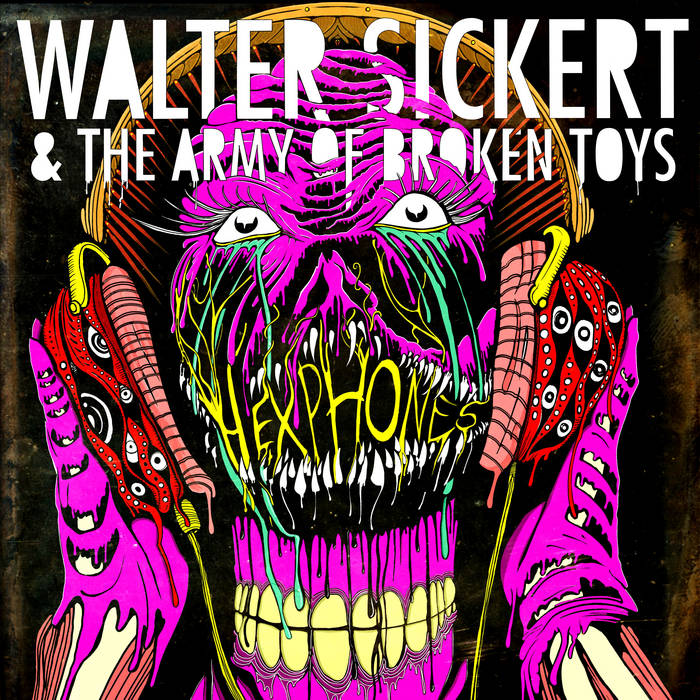 Submitted for the RPM Challenge 2019 - rpmchallenge.com

All music by WALTER SICKERT & the ARMY of BROKEN TOYS

HEXPHONES - was recorded in the 28 days of February for the RPM Challenge.

The songs were created with stream-of-consciousness and improvisational one-take recordings then mutated in the WIREFOREST mind-grapes of composer/band leader Walter Sickert.

Walter and I met during the time of the first RPM Challenge.

Since that 1st RPM entry, we've released 14 more RPM CDs, 4 commercial CDs, countless other music; including sound tracks to silent movies, singles, covers, a feature length movie soundtrack for the indie movie Some Freaks (which you can WATCH NOW on Netflix - www.netflix.com/title/80175314) and the score to a couple of Alice shorts by American McGee.

Walter is currently working on a super secret video game scoring project that we can tell you about later in 2019!

We've also put on one original musical 28 Seeds partnering with Liars & Believers at the Boston Center for the Arts - which started out as an RPM Challenge entry, and our second musical (Partnering with Company One), SHOCKHEADED PETER, which was originally by our hero band the Tiger Lillies.

And it hasn't been all music!

Walter has done countless fine art commissions, released pop art prints, created several comics and a children's book, created all of the art for SHOCKHEADED PETER, is currently working on a new series of found print art, and his new projects are even more ambitious!

FOUR years ago at this time Walter and I welcomed Wednesday Alice Edrie - who was born on 2/23/2015 (a month early) to parents not quite done with their RPM entry, who were in the middle of tech for their theatre show and who were grateful she didn't come during one of the epic 2015 Boston snow storms!


HEXPHONES is our 14th RPM offering. The band recorded, and Walter mixed and mastered everything by himself in our tiny home studio.

HEXPHONES is dedicated to the last 14 years of RPMs and to the people, places, and things that have made us who we are today.

Thank you RPM! May the next 14 be as eventful and successful!

Edrie, Walter, Wednesday & the rest of the Broken Toys

Featuring Oakland sounds from the Smart Bomb collective and Samplelov.